Timely and accurate information about bushfire positions can help emergency responders and the general public to minimize the impact of bushfires. But in the unexpected and extreme bushfire events, reliable and up-to-date information bushfire locations often becomes scarce. Authoritative information sources can suffer from bottlenecks and delays. Ground based sensor networks, satellites, and airborne infrared scanners can be used to detect and accurately map the affected areas of bushfires. But none of these authoritative sources, neither individually nor in combination, can continuously monitor bushfires in a large spatial and temporal extent. In addition, the feasibility of these data sources is coupled with bushfires, which limits the resilience of these data sources in extreme circumstances. On the other hand, user-generated social media data usually lacks the necessary structure and trustworthiness for reliable automated processing.
We explored a new data stream which sits in the middle of authoritative and social media data, and has the advantages of both data sources. This data is about telephone calls to the emergency services. Being crowdsourced, this data is more plentiful and more rapidly available than authoritative information sources during an emergency. On the other hand, because emergency calls are handled by trained professional operators, the data generated is more structured and reliable than social media data for automated processing. The idea is to take advantage of the burst of emergency calls that rapidly follow a disaster. The figure below shows the burst of emergency calls during devastating Black Saturday bushfires, where the rapid increase in area burned is temporally consistent with the burst of emergency calls.

The red polygons in the video below show the progression of the devastating Black Saturday bushfires happened in 2009. The black dots are the fire locations reported via emergency calls. The spread of the crowdsourced fire locations is spatially consistent with the progression of bushfires, in a moderate degree. Base on these observations, we developed an algorithm to estimate the perimeter of bushfires by analyzing the emergency call data. The blue polygons in the video below are our estimates of the perimeters of the Black Saturday bushfires.

The result above contains some obvious errors, e.g., the erroneous commissions near Melbourne and the mis-detection of the Redesdale fire. These errors are due to the systematic effect of population upon crowdsourced spatial data. In addition, the estimated perimeters sometimes spread towards a different direction from the ground truth. It is well-known that the spread of bushfire strongly depends on wind conditions. Thus we explored if we can combine the emergency call data with authoritative data such as population density and dynamic wind field to improve the accuracy of our estimator. The result is illustrated in the video below. The additional data significantly improves the accuracy of our estimator. While we only tested population and wind data, the same approach can be easily used to integrate other relevant data sources, such as temperature, humidity, fuel conditions, topography, population movements; and mobile phone coverage.

To share and extend our algorithm, we implemented a prototype workflow to process the real-time RSS feeds published by CFA. A basic web interface (below) was created to present the estimations. Users can explore the details of the feeds and our estimations on this interface, such as time, type, size, and number of historical changes. 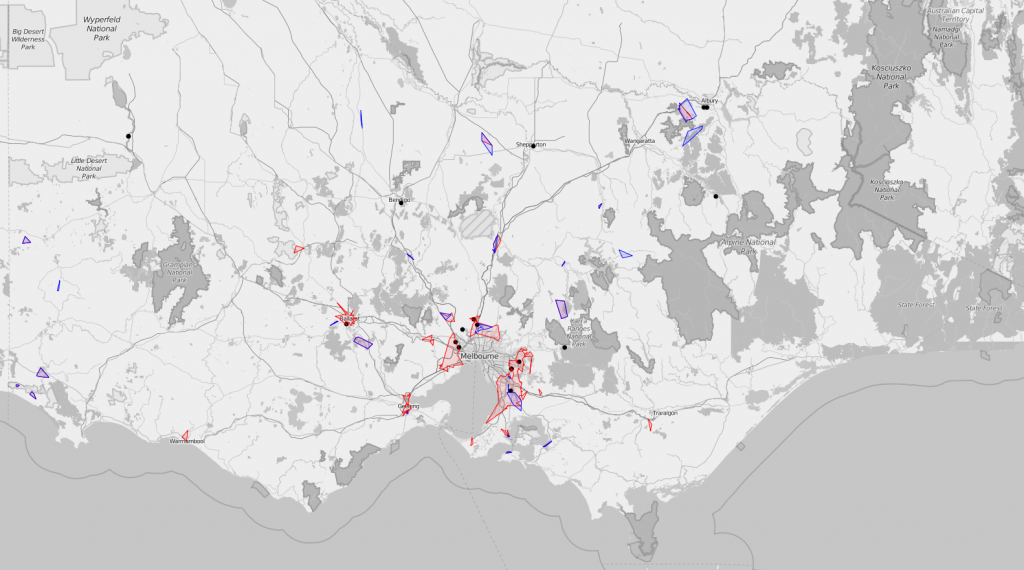