The UpRISER team, David, Danielle, Susan, Alex from CFA, Darius from Environmental Sensing Systems, Glenn from CSIRO, Matt, Allison, Mark Garvey, and Peter from the RISER team, held a half-day workshop on the progress of the UpRISER project on 4th June. 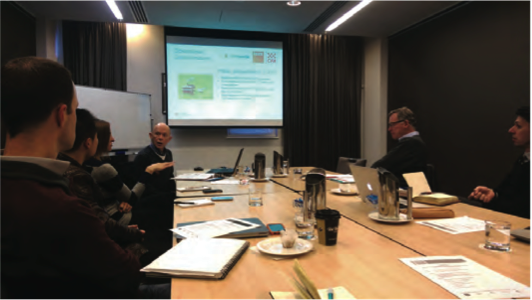 Mark gave a review of the progress of using UAV to collect grassland curing data. The talk covered detailed operational aspects of UAV imagery in the grassland curing monitoring application. Mark also demonstrated the UAV imagery data collected in Moorooduc (below) and Scoresby during the past curing season. The data illustrated clear temporal patterns of NDVI change over the summer. More importantly, the data showed high-spatial-resolution variation in NDVI, which is not observable with terrestrial observers or sensors or satellite imagery.

Darius introduced the set up of five multi-spectrum sensors in Scoresby and the data collected during the past summer. The temporal changes in the NDVI and green chromatic coordinate calculated from the sensor readings exhibit a temporal pattern that is consistent with the expected trend of grassland curing. Susan shared her experience of collecting ground observations of grassland curing near the sensors. Her experiences highlighted the large variability in curing that can occur across our test sites.

Planning of future UpRISER activities formed the focus of the latter part of the meeting. A conference paper and a journal paper are planned based on the ground measurements and UAV measurements of grassland curing. Matt and Mark will lead the development of the journal paper.