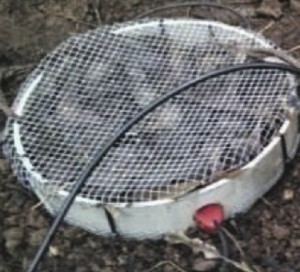 Collaborating with Tom Duff and Jane Cawson, a new RISERnet sensor network was deployed in Powelltown, Victoria in January. The network consists of one central gateway, 20 sensor motes, and five on-board sensors on each mote. Two of the five sensors (soil temperature and soil moisture sensors) are used for the first time, having been specially developed for RISERnet. The sensors are installed in litter packs (see right), instead of soil, as part of a new approach to fuel moisture content (FMC) monitoring.

The new sensors will allow us to investigate changes to fuel conditions at very high spatial and temporal resolu- tions. The data are already streaming though our server, although some technical issues are still being addressed. The real-time data can be viewed via RISERview (powelltown.thinkspatial.com.au, see below). Grey nodes are not yet operating, but the other nodes have live a recent historical data that can be viewed.