The first flight of UAV

Having received CASA approval, the UpRISER project has begun regular monitoring of the second site at Ferntree Gully. The first flight of our UAV at a Parks Victoria paddock in Ferntree Gully was on Friday 23rd January. There to see the first flight were David Nichols and Susan Kidnie (CFA), Garry Lalor (Parks Victoria, below), RISER researchers Mark Garvey, Matt Duckham, and Rain Liu (pilot, below). 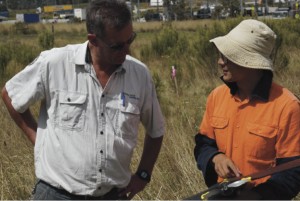 This second site was selected in close consultation with Parks Victoria and CFA. An existing CFA/CSIRO monitoring program at the site is capturing both field observations (taken by
Susan Kidnie) and static, ground-based imaging sensors developed by CSIRO (right, led by Darius Culvenor and Glenn Newnham). The UpRISER imagery, which includes optical, NIR, and red edge imagery, will be used to complement and crossvalidate data from the existing CFA monitoring and CSIRO sensors.

The aim of the project is to generate more accurate and precise information about the fine-grained nature of grassland curing over the curing season. Satellite imagery alone may not accurately capture the level of curing, for example in cases where new growth may be obscured by cured grasses (see below). However, ground observations do not scale easily to large areas or to new locations outside of Victoria, where an observer network may not yet be established. Hence, the UpRISER imagery may provide vital intermediate-level information about curing, with more detail than satellite imagery, but scalable to larger coverages than possible with human observers or ground-based sensors. 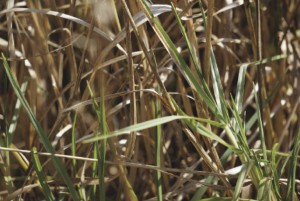