SensoRISER meeting on City of Melbourne CCTV for emergency services

On 14 January, Mark and Matt from RISER met with EMV to discuss the potential usefulness of City of Melbourne closed circuit video (CCTV) for emergency services. As part of of a series of meetings in recent months under the SensoRISER subproject, discussions with City of Melbourne have indicated that making the video streams available to EMV is both legally possible and has support from City of Melbourne. Bendigo and Geelong have also indicated that they would be open to discussions. CCTV networks have been established primarily for crime prevention and public safety purposes. However there is the potential to also use them in emergency management scenarios, such as urban flash-flooding or building fires (see 1972 photo below). A joint workshop with RISER, EMV, and CoM in early February to progress this work. 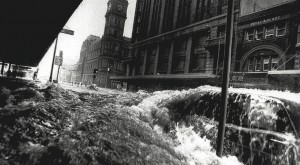