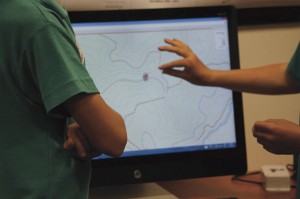 Thursday 11 December marked a milestone for the RISER project’s community engagement, as students from Anglesea Primary School showcased what they had learned from their year-long project on community resilience. Researchers from the RISER project along with colleagues from Melbourne University School of Population Health attended a showcase event at the Anglesea CFA focusing on community resilience. The RISER team were responsible for helping the students deploy and maintain their own six-node RISERnet. The students chose where to plase the nodes, deployed them, maintained them, monitored them using a customized version of RISERview (above), and then even integrated the measurements into Phoenix model executions, with the assistance of Tim Gazzard from DEPI.

In addition to demonstrating their work with RISERnet, the day also featured a range of other activities that the students had prepared. The project was integrated with wider work led by Lisa Gibbs at the School of Population Health, University of Melbourne, on the development of new curricula that recognize not only the vulnerability, but also the abilities of children to respond and support resilience in the event of an emergency. 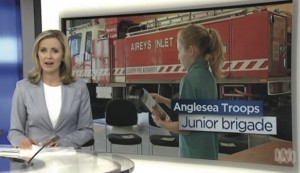 The day, and the role of the RISERnet sensors, was featured in a ABC News special report on Sunday 14th December.

While this year’s project work has come to an end, it is intended that this program of work will continue with a new class of students in 2016. For now we would like to thank all the RISER team led by Allison who contributed to the success, including Simon, James, Peter, and Andrew; as well as the excellent leadership and collaboration from Lisa Gibbs and her team at the School of Population Health; from Andy Rankin, Jamie Mackenzie, and Emma Gaunt and their team at Anglesea CFA; and of course from all the Year 5 students and teachers at Anglesea Primary School.