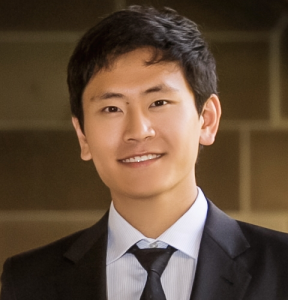 As the RISER project enters its final weeks, Dr Peter Zhong, the lead postdoctoral researcher on RISER, will finish his work on RISER next week, on 31st May. Peter has been an outstanding asset to the RISER project, and in this penultimate RISER update, we thought we’d reflect on some of Peter’s amazing contributions. 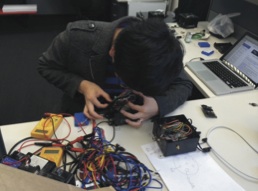 Peter officially started as the RISER postdoc more than two years ago, in early 2014. However, he had also been heavily involved the RISER project prior to that, as one of the lead technical supports for the development of RISERnet. His determination and techical ingenuity were major factors in helping get RISERnet working initially, as well as keeping it running over two summers and numerous deployments. 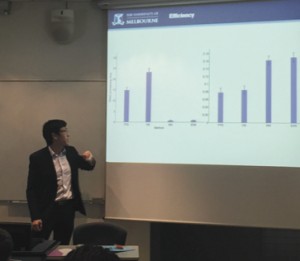 In addition to his work on the network itself, Peter was responsible for leading the design and implementation of the stream processing architecture that underpins RISERnet. The architecture uses the IBM Infosphere stream processing platform, and feeds data to all the outputs of RISERnet including RISERview. Peter presented his innovative work on RISERnet at a range of conference, including an international academic conference in France in 2015 (W2GIS in Grenoble).

In addition to his work on RISERnet, Peter supported all of the RISER subprojects including playing a leading role in MoistuRISER, the firefront tracking work, and assisting Mark and the team with the Anglesea education project and UpRISER.

Peter was equally successful in generating scholarly output as he was in every other area of activity. He is lead author on 3 accepted journal papers in major international journals, including the firefronts paper in the high impact journal Scientific Reports, published by the Nature Publishing Group. A further two papers, one journal article to be submitted shortly and one peer reviewed full conference article, were also led by him.

From June 1st, Peter will take up an exciting new position with IBM Research Australia. Peter was an IBM PhD Intern before joining the RISER project, and we are delighted he has secured the opportunity to rejoin IBM, our close partners throughout the RISER project. On behalf of the whole RISER team, we’d like to thank Peter for his outstanding contributions. Please join us in wishing Peter all the best in his new position.