Web-Cams, traffic counters, closed-circuit TV’s .. in today’s world there are numerous information systems that are gathering live data from sensors that describe particular phenomena, events and trends around them. Sometimes, data sensed for one purpose may be useful for another purpose (“opportunistic sensing”). In the case of an emergency, traditional information sources may be challenged and we may not know in advance what data will be available to build situational awareness and support decision making. Hence, opportunistic sensing can potentially be a useful source of data to build resilient emergency information systems. This project, undertaken by the RISER team, aims to identify and showcase specific examples of using opportunistic sensing for emergency applications, with a focus on urban emergency environments.

The team looked to assess sensors across a number of environments and determine one or two specific scenarios in which opportunistic sensing might assist in an emergency situation such as urban flash-flooding or a hazmat incident. From this point mechanisms through which data might be used to help in the scenario will be documented, the identification and assessment of techniques and models to manipulate the data into workable emergency intelligence will be investigated and if successful and an outline system design and short report that would be suitable to use as a basis for a prototype implementation will be prepared.

The main sensor information is not delivered in a way that is currently suited to the immediate needs of developing emergency situational awareness. Examples include parking and pedestrian sensors that deliver summary data from third-party providers rather than elemental records. Environmental sensors at the City of Melbourne are not yet established whilst road traffic systems at Vicroads did not offer easily accessible data. Whilst most sensors do not warrant further investigation at this time two have been identified as having some potential to supplement emergency management information systems.

Existing CCTV’s could be used to monitor a flash flood in Melbourne’s CBD such as this one in 1972.

Closed Circuit TV’s are in operation at the three local government agencies contacted, each having substantial central business districts. They have been established primarily for crime prevention and public safety purposes however there is the potential to also use them in emergency management scenario’s such as urban flash-flooding or building fires.

In the case of the City of Melbourne, the use of CCTV’s for emergency management is legally possible under current arrangements. Initial discussions with Bendigo and Geelong indicate that they would also be open to discussions to provide access to Emergency Services. The SensoRISER project team is liaising with Emergency Management Victoria to assess interest and provide further project support should it be required. 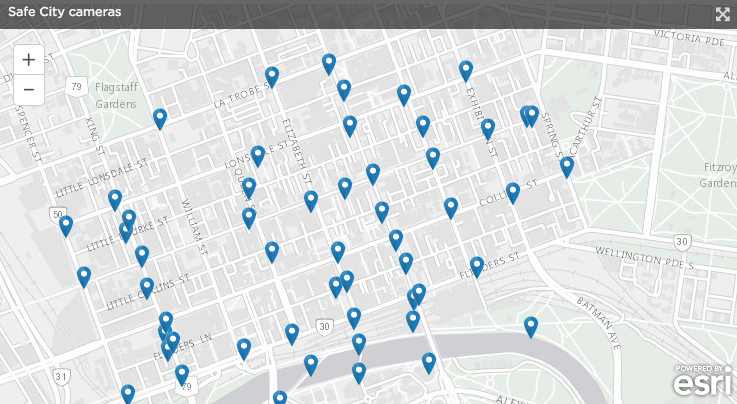 Mark Garvey and Matt Duckham met with Craig Buckingham (City of Melbourne), Cain Trist, Michael Jenkins, and John Simmons (EMV) on the 19th February at the University of Melbourne, to discuss further the potential for EMV access to the CoM SafeCity CCTV program (below). The discussions revealed a much better picture of both the potential benefits and challenges in achieving such a link up. The next steps in continuing the discussion will include a visit to CoM CCTV by RISER and EMV in the coming weeks

Victoria has embarked on an installation program for electricity smart meters. Smart meters are electronic devices that record household electricity consumption and report to utilities for monitoring and billing purposes. As a meter or section goes offline, messages are redirected away from the event along alternate paths back to utility control rooms. The meters are networked via WiFi and therefore represent a very resilient information network. In summary whilst other methods (satellites, ground observers, models) may be better at directly mapping a flood or fire, smart meters could provide useful information in the following circumstances:

As a back up to traditional systems Smart Meters potentially offer an alternative to Social Media data feeds i.e. the data is understood (a smart meter is inoperative at this exact location) and does not need trending, weighting and analysis. Mark Garvey visited the control room at Ausnet Services to view first hand network management and the interpretation of system derived data. Investigations are continuing.