RISERnet is a reconfigurable, redeployable wireless sensor network used in the RISER project as a testbed for exploring the capabilities of new data streams. RISERnet was developed in the lead-up to RISER, with the assistance of funding from the National Disaster Resilience Grants Scheme and a Melbourne School of Engineering Iconic Grant. A number of researchers directly contributed to the development of RISERnet, including: Peter Zhong, James Romeril, Namo Visudhipol, Sutharshan Rajasegarar, Yee Wei Law, Allison Kealy, Simon Fuller, Peter Farrell, Bill Moran, and Matt Duckham. The video below briefly summarizes the RISERnet and the RISERview sub-projects. 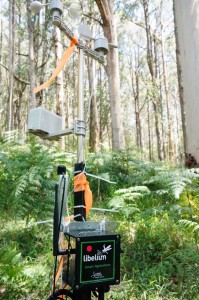 The technology for wireless sensor networks develops rapidly, and a range of different technologies have been deployed during the development of RISERnet. The RISER team deployed and maintained up to 70 Libelium Waspmotes, equipped with a range of environmental sensors, including temperature, humidity, soil moisture, fuel moisture, fuel temperature, atmospheric pressure, and solar radiation.

The overall architecture of the RISER system is shown below. This architecture includes three main components: the geographic sensor network itself (RISERnet); a stream-processing middle-tier, including database archiving; and a real-time user interface (RISERview).

From 2013 to 2015, three independent RISERnet networks were established in Olinda, Anglesea, and Powelltown. The Olinda network was the very first network that we deployed in dense forest environment. In November, 2013, 40 motes armed with temperature, humidity, solar radiation, soil moisture, weather station probes were deployed on a 4 × 10 grid. The interactive map below shows the location of sensor motes. The network was suspended in May, 2014 due to a significant upgrade to the external battery scheme. A total of 18 motes were upgraded and returned to the northwest half of the study area in August, 2014. The rest motes were not returned to the field. Instead, they will be used to validate distributed algorithms. The network was brought back to our lab in December 2015, ending with the collection of a large amount of high-resolution spatiotemporal weather data. The interactive map below is a web-based visualization interface — RISERview which was developed to explore the real-time and historical data and status of the RISERnet networks. While the network was running, the interface provides access to both real-time and historical sensor data, as well access to detailed current and historical data from individual nodes. After the network ended, you can still check the historical sensor data using the timeslider. 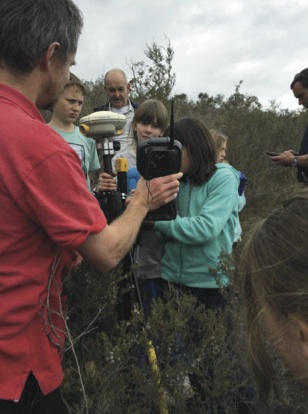 In collaboration with Anglesea CFA, Allison has been leading a project to establish a small RISER network at part of a broader and longer-term fire education initiative. The project aims to establish a small 6-node networks in Anglesea, managed by children from Anglesea Primary School. As a demonstration network, the motes were armed with temperature, humidity, soil moisture, and atmospheric pressure sensors. The school children planed the deployment locations of sensor motes (see the RISERview interface below) and made the deployment in October, 2014. They also maintained the network, replaced batteries as necessary and fixed any problems with the sensors that occurred following deployment. The activity is just one part of a larger and longer-term fire education project involving the whole Anglesea community. The project is using a range of activities to help both children and adults better understand how to live safely in a bushfire-prone environment, a key feature of resilient societies. Our belief at RISER is that resilient information systems, such as RISERnet, have a part to play in supporting such resilient communities. Better integrating these technologies into everyday life makes them more likely to be used and useful, as well as teaching us a lot about the priorities for future research. 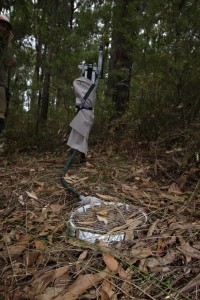 A significant feature of RISERnet is its extensibility: the network can easily be redeployed, and reconfigured with new sensors. A third RISERnet network armed with two new types of sensors was deployed in Powelltown, Victoria in January, 2015. The new sensors, originally designed to measure soil temperature (a PT1000 sensor) and soil moisture (a VH400 sensor), are used to monitor fuel conditions directly. Each mote in Powelltown is armed with three VH400 probes of which the average outputs are measured. The Powelltown site has heterogeneous vegetation so an irregular deployment was used (see the RISERview interface below), in order to form a robust multi-hop mesh network. The motes were distributed more densely in dense-vegetation regions, where signal attenuation is higher. In sparse-vegetation regions, the motes are farther from each other.

The data from the RISERnet networks was used in a range of emergency applications. For example, the MoistuRISER sub-project investigated more accurate fine fuel moisture content models based on RISERnet. The results will improve fire modeling accuracy and situational awareness. At this stage, we only used the RISERnet networks as a data collection and transmission tool. In the future, RISERnet can be used to validate decentralized algorithms. After the validation, we may integrate some decentralized algorithms in RISERnet networks to take the advantages of distributed systems. Check back for more information about these ongoing projects.