Last update we reported on a new collaboration emerging with other researchers working in the area of fuel moisture content (FMC) monitoring at the University of Melbourne, including Tom Duff, Petter Nyman, Craig Nitschke. Inspired by Petter’s works on estimating FMC by inserting soil moisture probes (VH400) into the fuel layer, Peter designed a plan to log the analogue output signal of the VH400 probes using a waspmote in RISERnet. 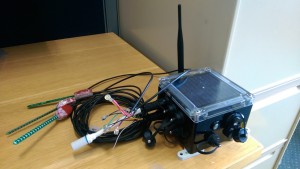 With a little rewiring, one of the sensor sockets on a waspmote can support three VH400 probes. Peter has tested this plan and successfully measured the voltage of the output signals of the three VH400 probes using a waspmote (pictured). As fuel temperature is an important parameter for calculating FMC, we have also ordered five soil temperature sensors from Libelium to investigate if we can use them to measure fuel temperature. Peter has modified the experimental interface to include these two new types of sensors (right). Thus we now have two potential routes to estimate FMC with RISERnet: 1) using indirect measurements which include temperature, humidity, solar radiation, and wind speed to calculate FMC with many existing models; 2) using direct measurements of the soil temperature sensor and soil moisture sensors VH400 to compute FMC using Petter’s equation. In our coming experiments, we will use precisely controlled environmental chamber experiments to measure the true FMC, and compare this to our two estimation models. We will also now be able to investigate if more accurate estimates of FMC can be obtained by combining the weather data and direct measurements from the fuel layer.